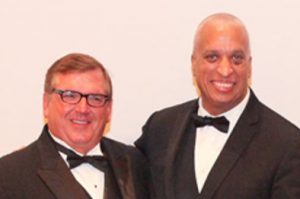 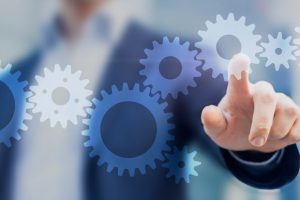 LEADERSHIP TEAM – Horizon is led by the executive team of Frank Davis and Steve Jager.

Frank Davis serves as President & Chief Executive Officer. During his seventeen-year tenure as the President of Horizon, he has led the growth of the company from a zero-revenue startup to a well-recognized and respected provider of Process, Project, & Material Services to the industrial, institutional, federal, and state business segments.  Frank is a native of the distressed and widely chronicled Anacostia area of Washington DC and an Electrical Engineering (BSEE) graduate of Bucknell University (Class Of 1982) with distinction.  Frank is also a previous William Randolph Hearst Foundation United States Senate Youth scholar.  After graduating from Bucknell, Frank began a distinguished twenty-year career with corporations including the Westinghouse Electric, Honeywell, The Invensys Group, and Johnson Controls. In his last Fortune 500 corporate role, Frank was the Director of Planning and Acquisitions for Johnson Controls and was winner of the Presidents Inner Circle award. After leaving Bucknell, Frank also continued his education and received his Masters’ degree (MBA) in Business from the University of Alabama at Birmingham and his executive diploma from the Tuck School of Business at Dartmouth.  Frank is very active in the community as a member of The National Minority Supplier Development Council, The Association For Strategic Planning, The American Society For Quality, The Society For Human Resource Management, as the previous Vice President and Strategic Planning Chair of The Bucknell University Alumni Association Board of Directors, and as a current member of the University of Alabama at Birmingham Business School Advisory Board.   Franks’ 2018 book Continuous Improvement by Improving Continuously (CIBIC) is widely distributed by retailers including Amazon, Barnes & Noble, and Books-A-Million among others.

Steve Jager serves as Senior Vice President & Chief Financial Officer.  A Birmingham Alabama native, Steve has held a wide variety of executive and senior managerial positions in the manufacturing and financial services segments.  Steve is also well known in the investment community as an investor in new ventures.   Steve was previously CEO and Primary Shareholder of Clark Substations Incorporated, President and Owner of Jager Consulting, and as Retail Sales Manager at AmSouth Bank.   Steve has also held a variety of executive positions with ventures including Cloud Technologies and Brassfield Technologies.   Steve received his Bachelors Degree in Marketing & Management from the University of North Alabama.   Steve has been very active in philanthropic circles as the previous Board of Directors President of the Crisis Center of Alabama, previous Board of Directors President of Big Brothers/Big Sisters of Birmingham, and a Campaign Chairman for the United Way of Shelby County.